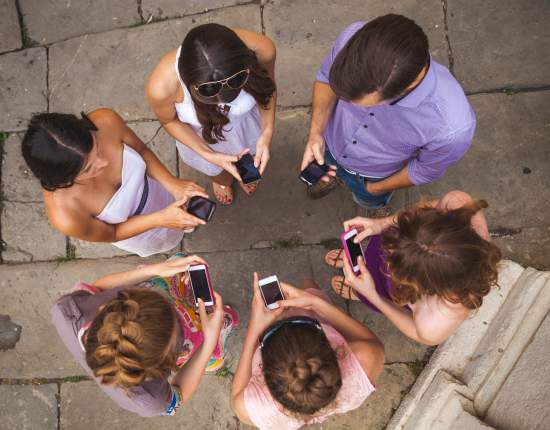 An unfiltered look at colleges through filtered Instagram photos

When Jackson Barnett, 19, began applying to colleges, he realized he was going to have a problem. Not only was it difficult for the son of two high school teachers to afford applying to many colleges, but the Alabama teen didn’t have the resources to tour the various East Coast and Midwest schools he was interested in.

“One of the most challenging parts of the admissions process was not getting to see all the colleges I was applying to,” he says. “I had to have a lot of faith in colleges’ websites. That’s where Instagram came in.”

But Barnett soon realized that if he clicked on an Instagram photo’s geotagged location, he would be able to see all of the pictures tagged in that specific area — which means he’d see images taken by actual students.

“I definitely went through a bunch of people’s Instagrams just to see what the life of an average student was,” he says. “It’s like having a tour of the school by a real student who isn’t paid to show you the school and tell you the things the admissions office wants you to hear. It’s like you’re getting a tiny slice of that college and it’s real and raw.”

Barnett paid particular attention to whether a school was diverse and politically active. For example, he noted that students at Macalester College were celebrating when gay marriage was legalized in Minnesota, and that campuses were friendly toward protesting students.

The “Natural” Thing to Do

A recent survey found that 76% of teens use Instagram. The graduating class of 2015 will be the first set of students who were able to capture their entire high school experience — from the first day of freshman to the last of senior year — on the photo-sharing app, which was founded in late 2010. So it makes sense that they would use it to not only to follow friends and celebrities, but to research the next stage of their lives as well.

“The natural thing I’d do after visiting a school was to follow it on Instagram,” Morgan Levy, 17, says. The more the New Jersey high school senior looked through school accounts, geotags and hashtags, the more she was drawn to schools that had large athletic departments. She fed off game day energy, which is one of the reasons why she applied early to and accepted a spot at Lafayette College in Pennsylvania.

“When I began looking at schools I didn’t think I’d end up at a division one sports school,” she says. “I never thought I’d be sitting here watching the first round of March Madness.”

Of course, Levy saw some things on Instagram that would act as a red flag.

“I definitely did find some things that bothered me,” she says. “Some campuses seemed more socially oriented towards a lot of partying and that overwhelmed me a little bit.”

Instagram provides an unfiltered look at a campus via filtered photographs-in contrast to the often highly curated pictures on a school’s official Instagram feed.

“I’ve noticed that we’ve all been using Instagram to see the authentic side of the college, beyond the pretty, glossy brochures,” Isabel Song, 18, says.

The Colorado senior is in the process of hearing back from the 21 schools she applied to. “Now I really want to see where I can fit in with students,” she says. “If I find a really cool post I’ll go through the student’s Instagram page. It shows them out with friends and being social, but they’ll also show community things going on.”

Song hopes to be a pediatric oncologist, so she keeps an eye out for Instagram photos that show undergraduates doing scientific research. Although she’s wary of student Instagram feeds that are over-filled with activities, indicating it might be an environment in which students overextend themselves.

Colleges Are Paying Attention to Their Insta-Image

Bowdoin’s director of digital and social media, Holly Sherburne, is aware that prospective students are following the school’s accounts and hashtags. In fact, Sherburne hired a freshman to work for her this year after noticing that she chronicled everything from receiving her acceptance letter to buying college gear to her first day of class at the Maine college using the #Bowdoin hashtag.

“We have what we call a student digital media team and five students deal with Instagram specifically,” she says. Students will post pictures of student activities on their way to class to offer prospective students a slice of day-to-day life on campus.

Although when clicking on actual students’ Instagrams, applicants might see activity that wouldn’t exactly be advertised by the university, like underage drinking or partying or even protests against the university.

University of Virginia senior assistant dean of admissions Jeannine Lalonde says that that isn’t a huge concern. “Students are smart and they know if they don’t lock their accounts down, prospective students aren’t the people they should be worried about — employers are,” she says.

And if a high school student does see an Instagram photo that a UVA student posted participating in a protest, she says that that isn’t a problem. “I want a prospective to student to know that a protest is OK,” she says.

Lalonde encourages applicants to follow her quirky Instagram (that shows off Quidditch matches and beloved cafeteria workers), but she notices that most of the comments she gets are from parents. She says if high school students really want an inside scoop on what campus is like, then they would probably be more intrigued in stalking the school on Yik Yak, an anonymous messaging app.

“I did not use Instagram to look at colleges, and I rarely followed universities on other types of social media,” says Maya Sherne, 18, who is currently spending a gap year after high school studying in Israel. “That being said, I used the schools’ official site quite frequently throughout the application process, and only glanced at their social media pages when I was seriously considering the school or when I had been accepted.”

Ian Miller, 18, stayed off Instagram prior to getting into colleges for superstitious reasons.

“For some reason in my head it made perfect sense that by avoiding the college completely on every website but the Common App, I would keep my expectations as low as possible and soften the blow should rejection be eminent, the thought being that just looking at the social media accounts would make me want to go even more and increase my devastation if that would not be possible,” he says.

Although for Barnett, who had searched colleges’ Instagrams for signs of embracing diversity and social activism, using the photo-sharing app was useful in helping him decide to go to Wesleyan University in Connecticut, where he is currently finishing his freshman year.

And, Barnett says, “It’s even better than what was on Instagram.”

Written by Laura Stampler. To read the full article, click here. For more information on creating your own online brand, custom WordPress website and social media strategy, please visit us at www.mydigibrand.com and follow us everywhere @mydigitalbrand.