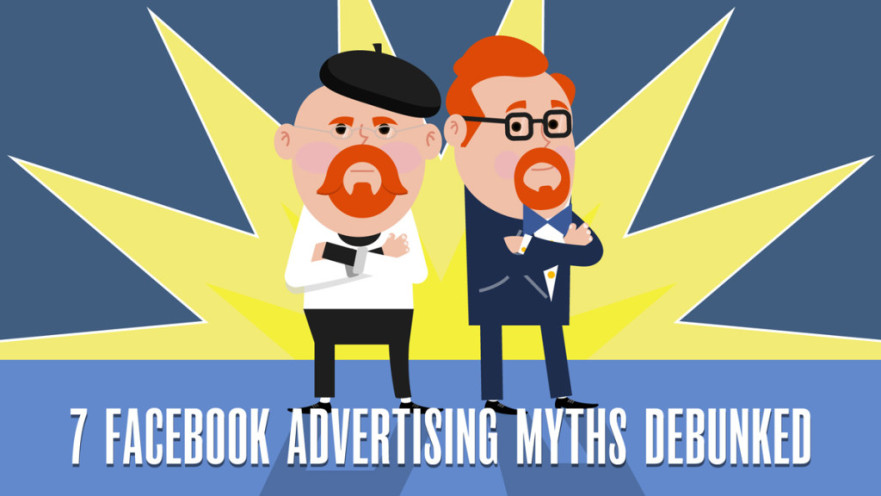 When we started working on AdEspresso, one of my biggest concerns was that small to medium size businesses were not yet ready for it.

And I don’t mean ready for an alternative to Facebook’s Ads Manager but for advertising on Facebook at all. Most users saw the new social media advertising channel as something for big brands to spend money on before moving on to the next big thing.

But I was sure that was not the case. And I was sure because Facebook Ads were already working for us. As a medium-sized web agency, we were not just generating brand awareness but real traffic and sales for our customers. We could have done better but still the results were there!

Nowadays, Facebook is seen by most marketers as both a mature platform and a reliable advertising channel. However, some early-day myths have survived and it’s time to debunk them, once and for all.

This is probably the oldest of the seven myths listed here. Its roots date back to the early days of Facebook when no one was yet sure how to use it and, as a matter of fact, only top brands were brave enough (or had pockets deep enough) to experiment with it.

Even as Facebook advertising evolved, many advertisers continued to see it as a sort of alternative to email marketing. You were spending money to acquire subscribers in the form of “likes” to then target with messages.

What they didn’t see coming was that, as everyone jumped on-board, the value of those subscribers kept falling to today’s level where, on average, only a single digit percentage of a page’s fans see every post.

Today, most advertisers understand the real value of Facebook Advertising as a way to generate traffic and real business value. A quick query of >$10M in Facebook Ad spending managed through AdEspresso reveals the following:

Advertisers are focusing on creating engagement, conversions and clicks to their websites. Only 7.7% of the campaigns are targeted to getting more Likes!

I wrote about this topic last year. Facebook is a big successful company and bashing Facebook Ads is fun and a great way to attract attention.

Will your campaign receive fake clicks? Of course it will. Every advertising platform gets a small percentage of fake clicks from bots and click farms.

Is the percentage of fake clicks higher than Google? I don’t have data to back this, but I think it is. Facebook is still in its early days compared to Google and they definitely need to work on their fraud detection systems.

Should you care about fake clicks? No. It’s just a small percentage. It can be frustrating, I know, but it’s irrelevant to your overall campaign performance. As long as your ROI is positive, keep advertising. Testing and optimizing your Facebook Ads can be more rewarding than trying to eliminate a small click fraud.

This myth is extremely simple for me to debunk because we’ve promoted AdEspresso, a B2B application, with great success using Facebook Ads over the last 2 years.

Facebook is a Social Network so people browse Facebook to connect with their friends, find interesting news and, of course, check out cat pictures.

But guess what? Companies are made of people and Facebook Ads are a great way to target them.

With Facebook Ads, you can target users by the industry they work in or by their job titles and purchase behaviors. There is no reason not to advertise a business product on Facebook.

Of course, you need to understand your channel and adapt to it.

Something like “We create stunning Websites for $990” won’t work. And, posted on a social network, will be perceived as an impolite intrusion on the user experience. That’s why Facebook is penalizing these kinds of posts by Facebook Pages.

And while you’re not penalized when you advertise them (yep, they’re partially willing to trade UX for money), they simply won’t work. Instead, you should engage with your user.

Try something like: “Feeling stressed because your website never works properly and your boss is mad at you? Let’s talk. We’ll help you get it right”.

Or maybe instead of pushing for a sale, try to generate leads, advertising some free eBooks to download in return for users’ emails and information.

Facebook is a corporation, a big one, with investors that is publicly listed. Their goal is to make money, you can bet on that.

Facebook is also not stupid. They understand something that many don’t: Facebook’s customers are its users, not its advertisers.

Anyone with a great deal of traffic and billions of users can easily attract advertisers. That’s the easy part. What Facebook has always been focused on is attracting those billions of users and keeping them on the platform.

This is something that Myspace missed. They let marketers ruin their platform, transforming it into a spam-filled website that ruined the user experience.

If you were to see all the posts from all the pages that you liked, you’d have thousands of promotional posts in your newsfeed with no way of seeing what your friends are doing and those lovely cats pictures.

While, of course, the reduction of organic reach has increased the volume of advertising, it was not done to sell more ads but to provide users with a better experience, showing them only what they care most about.

And be advised, the more companies join Facebook and start posting, the more the organic reach will decrease. It’s a simple matter of competition to find space in the user Newsfeed.

I’ve recently discussed this with Sean Ellis and others on GrowthHackers.com. Check out the conversation if you’re interested in learning more.

I hear this all day long. “I want to use CPC bidding, therefore I’ll pay only for clicks and if no one clicks on my ads, I won’t pay a dime.”

Fear. Fear is what is making you go with CPC. Fear of spending money without generating a single click. And I’ll be honest. That might happen. It’s part of the learning process.

On the other hand, when you bid in Optimized CPM, Facebook will apply a complex layer of optimization to help you get more qualified traffic that is likely to actually purchase.

The cost per click is an irrelevant metric. Track your conversions. Track your revenues. And optimize for those metrics. It’s better to have a $2 click that converts into a sale than 10 $1 clicks that don’t convert into any customers.

6) Advertising in the Right Column is useless

These kind of assertions are just plain wrong when it comes to Facebook Ads.

There’s no way of telling if the Right Column will work for you until you try it.

Of course, it’s true that the Click Through Rate with this placement is usually 10 times worse than on the Newsfeed but there’s also much more inventory there and the prices are much cheaper.

Users also have fewer distractions in right column ads because they can click on them without any likes, comments, or shares getting in their way.

Pro Tip: Use pictures with strong visual contrast to attract users. Retargeting in the right column usually works very well as users already know your brand and are more likely to notice them even if they are in a less visible place.

This myth should be dead and forgotten by now. I didn’t even want to include it in the list. It’s 2015 and marketers around the world should have better things to talk about.

But just a week ago I bought one of the top 5 Facebook Ad books on the Kindle store and after just 10 pages, the author was claiming there’s no harm in buying some Facebook Likes to make your page seem more popular.

Selling Facebook likes is a scam and buying them will only hurt you:

Check out this post with real world data proving that buying Facebook Likes is not the way to go.

This article can be summarized in just 6 words. The AdEspresso motto: Never assume anything. Always test everything.

No matter what you hear from self-proclaimed Facebook Ad Gurus, always take it with a grain of salt. Don’t believe everything you read. It might be dead wrong or just way out of date and no longer true.

With as little as $100, you can run your own test and confirm what you’ve read before investing further. Start doing that now!

Written by Massimo Chieruzzi. To read the full article, click here. For more information on creating your own online brand, custom WordPress website and social media strategy, please visit us at www.mydigibrand.com and follow us everywhere @mydigitalbrand.