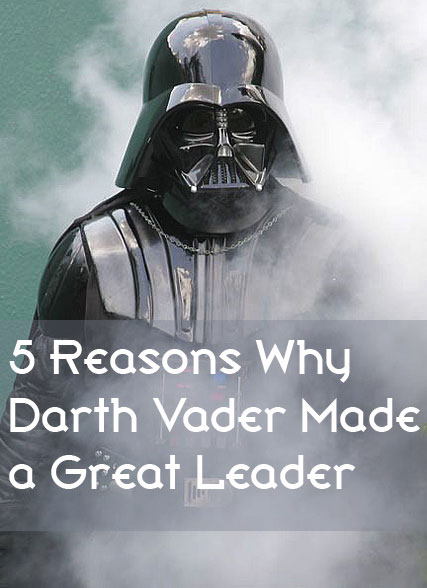 Is the Force with you as you’re leading your team or company?

Maybe you look up to modern leaders like Warren Buffet, Angela Merkel, the Dalai Lama or even Bono for examples on how to inspire teams, energize followers, and achieve great success. But lessons on leadership can be found in less obvious places too.

With my tongue firmly planted in my cheek, I present to you: leadership lessons from Darth Vader.

One of the most iconic fictional villains of all time, Darth Vader was a fearless leader in the Galactic Empire of the Star Wars movies. Though thwarted in the end, he rose to power through single-minded focus. Today Vader even has his own comic series.

Am I suggesting you lead like Darth Vader? No. I don’t think you should choke your team members into submission by using the Force. But Vader got as far as he did because he wasn’t afraid to step up as a leader in the Empire, and all business leaders can learn a thing or two from that.

Without further ado, the top five reasons Darth Vader was a successful leader:

1. He Stayed Focused On His Top Priorities

Vader might have been a brutal son-of-a-gun, but he had his priorities straight. To fulfill his purpose of preserving power for the Emperor, he paid attention to what was going on in the galaxy, evaluated impacts and focused his attention on high-return activities – like recruiting Luke to the Dark Side. Did you ever see Vader get side-tracked by “shiny objects?” No sir.

2. He Delegated Responsibilities That Were Not The Best Use Of His Sith-Lord Power

Vader knew when to get personally involved in an issue, like the duel with Luke in the mining complex in The Empire Strikes Back. Vader readily deployed Storm Troopers to capture and maim – but he knew a fight like that was best left to the leader. A great leader knows when to take care of something personally and when to delegate it so he can focus on his zone of genius.

3. He Admitted When He Was Wrong

In the end of Return of the Jedi (spoiler alert!), Vader experiences a moment of humanity when the Emperor attacks Luke. Vader kills the Emperor and reconnects with his son, and in Vader’s dying breath he tells Luke he was right. Okay – let’s hope it doesn’t take your dying breath to tell your team member they were right about something (or in other words, you were wrong). But the point is that even the most important leaders need to know when to admit they made a mistake.

Vader understood that the Rebels were a threat to his success, and he dealt with them proactively, luring Han, Leia and Chewbacca into a trap in Cloud City. Instead of letting the chips fall where they may, a great leader assesses risk and takes action. Whether that’s investing in SEO help to push his business’s search-engine rankings closer to that of competitors, expanding his content marketing program or letting a lagging employee go, a great leader acts to defend his goals.

5. He Stayed Aware Of What His Team Was Doing And Directed Them As Necessary

Though he had countless Storm Troopers at his disposal, Vader didn’t just check out of the day-to-day activities of his team. He made sure he knew what was going on within his team at all times. He requested progress reports on the on Death Star and had a personal hand in carbon-freezing Han Solo to ensure it went according to his plan.

Have you ever had a successful but villain-like leader? Or ARE you one?

Written by Jessica Mehring. To read the full article, click here. For more information on creating your own online brand, custom WordPress website and social media strategy, please visit us at www.mydigibrand.com and follow us everywhere @mydigitalbrand.